SIBU, May 16 — The DAP pulled off a surprise win in the Sibu by-election today, when its candidate, Wong Ho Leng,(pic left) won the three-cornered-fight with a 398 majority.

The official result was announced by the Election Commission at about 10.58 pm.

The two-hour delay in the announcement of the result was due to a dispute in the postal ballots where 208 votes were rejected. This however did not change the final result.

According to the EC, the dispute was over the validity of witnesses' signature for postal votes.

BN had earlier been expected to retain its Sarawak stronghold but lost despite the best efforts of Prime Minister Datuk Seri Najib Razak.

Pakatan Rakyat has managed to reverse its series of losses (Bagan Pinang and Hulu Selangor) with this win in Sibu.

Of the 11 by-elections since March 2008, Pakatan has won eight while BN three. Sibu is also Pakatan's first victory in East Malaysia. PKR lost in Batang Ai in April last year.

For DAP, this is the first by-election which the party has won in 13 years. Sibu will be the party's second parliamentary seat in Sarawak to its existing Bandar Kuching.

The Sibu by-election was called following the death of five-time MP and Deputy Transport Minister Datuk Robert Lau Hoi Chew on April 9. - reports from the Star and Malaysian Insider.
Posted by maria a samad (kak ton) at 5/16/2010 11:18:00 pm 2 comments:

Sibu by-election: It's a three-way fight 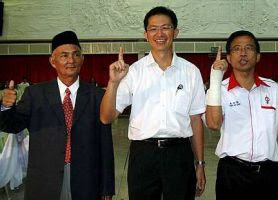 Returning officer Wong See Meng announced this at 11.30am Saturday, after the three candidates filed their nominations. There were no objections filed.

Supporters from both sides broke out in chants and songs after objection time was announced, following the filing of nominations. There was good-natured jeering between Barisan and DAP supporters, according to the Star online report.

As early as 7am, party leaders and supporters, bearing banners and flags, had gathered a short distance from the Sibu Civic Centre, where the nominations were to be filed.

Polling for the seat is on May 16. The by-election was triggered by the death of Deputy Transport Minister and five-term Sibu MP Datuk Robert Lau Hoi Chew on April 9.

According to the electoral roll, updated as of April 9 this year, Chinese voters make up almost 67% of the total number of voters, followed by Malay/Melanau (10.5%) and Sarawak bumiputeras (22%). - The Star