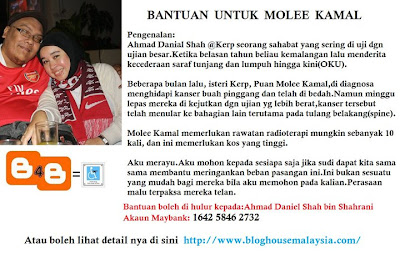 
Blog House Malaysia has launched a fund for Kerp or Danny, a wheelchair-bound blogger, who has been actively writing since 2007and who is also a former columnist with the Malay Mail.

His wife, Molee, whom he married in March last year, after a courtship of 11 years, has been diagnosed with kidney cancer and the cells have now spread to her lower vetebra requiring radiaton.

Washington has less reason or justification to wage war in Afghanistan now that Osama bin laden is no more...


The killing of Osama bin Laden is more of a symbolic victory for the Obama administration than a game changer for the US strategy in the "Greater Middle East".

After 10 years of pursuing al-Qaeda's leader, responsible for the September 11, 2001 attacks, the US has closed a chapter, but not the book, in its war on al-Qaeda and "international terrorism".

Since the attacks on New York and Washington, "al-Qaeda central" which was being run from the Pakistani Afghan border, has mutated into a global network of affiliates.

US "terrorism experts" have been split over the relevance of "al-Qaeda central" under the direct leadership of bin Laden and his lieutenants, in comparison to the global network of smaller cells and hardcore fighters who pledged allegiance to the leadership, or to put it bluntly, to the brand: "al-Qaeda".
http://www.blogger.com/img/blank.gif
Those who discount the importance of the 'disconnected and on-the-run' al-Qaeda leaders on the border of Pakistan and Afghanistan underline the importance of the decentralisation of the group.

They refer to it as SPIN (segmented, polycentric, ideologically networked) group, where al-Qaeda fighters in various parts of the world have increasingly acted on their own without direct orders or logistical and financial support from "al-Qaeda central".

In that way, al-Qaeda was more of a global and post-modern creature or phenomenon than a religious one. continue here : Analysis: Killing the alibi - Opinion - Al Jazeera English
Posted by maria a samad (kak ton) at 5/02/2011 08:07:00 pm 1 comment: