In the last general election, the BN candidate, the late Datuk Sulaiman Taha beat Md Saim Siran, from PAS, with a majority of 2,492 votes.

The result was announced by the Returning Officer for the by-election for the Tenang state seat, Md Asri Amir, at the Labis District Council Multi-purpose Hall at about 10.05 Sunday night.

The result was initially expected at 8pm but a major flood that hit the state constituency had delayed the arrival of several ballot boxes.

As soon as the result was announced, Mohd Azahar, who was wearing a blue shirt and a 'songkok', was hoisted by his supporters over their shoulders while chanting 'Hidup BN!' (Long Live BN).

Despite the major flood that hit several low-lying areas in the Tenang state constituency, polling went smoothly with 67 per cent or 9,833 of the total of 14,753 registered voters in the constituency casting their votes.

The flood and heavy rain throughout the day had caused the voter turnout to drop this time compared with the 73.52 per cent recorded in the last general election.

Some of the voters had to go to the polling centres by boats and trucks provided by several government agencies such as the Fire and Rescue Department, Malaysian Armed Forces, police and the Malaysian Red Crescent Society.

Mohd Azahar, 39, who is also fondly referred to as 'Tok Ai', was a former Assistant Land and District Administrator for the Rengit sub-district, Batu Pahat, while Normala was a former teacher.

Today, 14,753 Tenang voters will cast their ballots to elect their next assemblyperson.

Their choice is between Umno's Azahar Ibrahim, 39, a former assistant district officer or PAS' Normala Sudirman, 38, a former remedial teacher.

Voting is from 8am to 5pm. The vote counting will be done in each polling station soon after the polls are close. The ballot boxes will then be transferred to the main tally centre - Labis municipal hall - where the final result announced. The Election Commission expects the results to be known by 9 pm.

According to the weather broadcast, morning in Tenang will be chilly and cloudy, to be followed by heavy rain in the afternoon.

It has been raining all day long over the past few days, dampening the final leg of campaigning for the contesting political parties.

The Tenang state seat fell vacant on Jan 17 when the former assemblyperson Sulaiman Taha from Umno died due to complication of diabetes.

Tenang, one of the two state seats under Labis parliamentary seat, has always been a BN stronghold. BN won the seat in the 2004 general election with 5,517 majority but this was slashed to 2,492 in the 2008 general election.

Live updates by the star, here

The BN has rejected a proposed amendment to the Selangor constitution tabled by the Pakatan Rakyat government of Selangor at Monday's special sitting of the state legislative assembly because "it is ultra vires the federal constitution".

Opposition Leader Datuk Satim Diman said that thesitting was "a futile effort and a waste of time" during the debate on the Selangor State Constitution Enactment (Second Part) (Amendment) 2011 Bill, Bernama reports.

SHAH ALAM, Jan 24 (Bernama) -- The Barisan Nasional (BN) has rejected a proposed amendment to the Selangor Constitution tabled by the PKR-DAP-PAS government of Selangor at today's special sitting of the Selangor Legislative Assembly because "it is ultra vires the Federal Constitution".

"Today's sitting of the assembly is a futile effort and a waste of time," said Selangor Opposition Leader Datuk Mohamad Satim Diman during the debate on the Selangor State Constitution Enactment (Second Part) (Amendment) 2011 Bill.

He was explaining why all the 20 BN assemblymen and the sole independent assemblyman were against the proposed amendment tabled by Menteri Besar Tan Sri Abdul Khalid Ibrahim which, among other things, seeks to "restore the powers of the Sultan of Selangor and the Menteri Besar" in the appointment of the State Secretary, State Financial Officer and State Legal Advisor.

(The sole independent assemblyman is Badrul Hisham Abdullah whose Port Klang seat has been declared vacant by Speaker Datuk Teng Chang Khim and he was prohibited from attending today's sitting of the assembly.)

The amendment to the state constitution was proposed following the appointment of Datuk Mohd Khusrin Munawi as the state secretary effective Jan 1 by the Public Service Commission. The appointment was disputed by the state government because the menteri besar was purportedly not consulted.

Mohamad Satim said the proposed amendment was politically motivated and portrayed the hypocrisy and insincerity of the Selangor government.

He said the BN, during its administration of Selangor, had never neglected or ignored the Sultan of Selangor.

On the appointment of Mohd Khusrin as the state secretary, he said Abdul Khalid himself had not accepted the appointment when Sultan Sharafuddin Idris Shah had given his consent.

"This can be regarded as treason," he said...cont here .

Tenang by-election: It's a straight fight 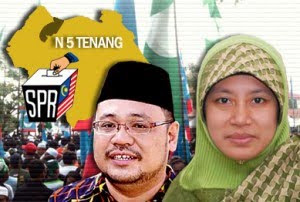 Barisan wants to increase its majority to more than 5,000 while Pakatan hopes to reduce Barisan’s majority during the 2008 polls.

Sulaiman had won the seat by a majority of 2,492 votes in the 2008 general election, defeating PAS’ Md Saim Siran.

There are 14,753 voters including 18 postal voters, in the constituency.

The other state seat in the area is Bekok, held by Tan Kok Hong, also of Barisan. 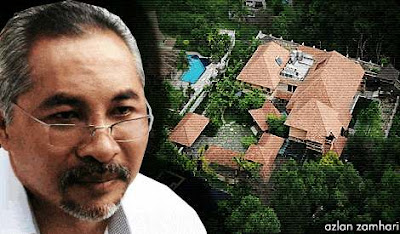 SHAH ALAM: The corruption trial of former Selangor Mentri Besar Datuk Seri Dr Mohd Khir Toyo has been been fixed for June 6 to 24.

Judge Justice Mohtarudin Baki fixed the dates Thursday and also moved the case up to the High Court here.

On Dec 6, Dr Mohd Khir was charged with land fraud involving two plots of land and a house in Shah Alam worth millions of ringgit.

He was charged at the Sessions Court here with knowingly purchasing the properties from Ditamas Sdn Bhd director Shamsuddin Haryoni in 2007 much lower than its original price.

Dr Khir, 45, is alleged to have committed the offence at the Selangor Mentri Besar’s official residence on May 29, when he obtained for himself and his wife Datin Seri Zahrah Kechik the two plots of land and house from Shamsuddin at RM3.5mil.

Dr Khir was the Mentri Besar at that time.

Shamsuddin is charged under Section 109 and Section 165 of the Penal Code with abetting Dr Khir in the deal. the Star