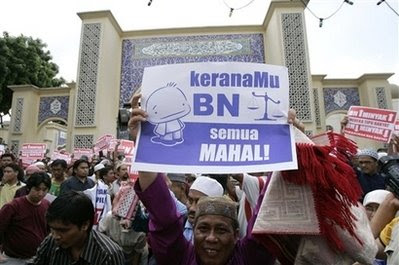 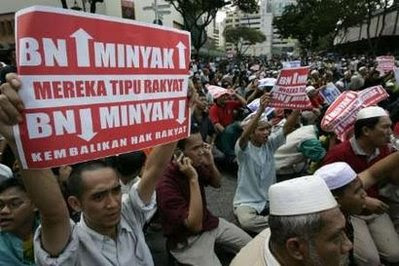 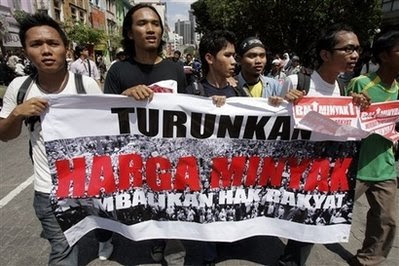 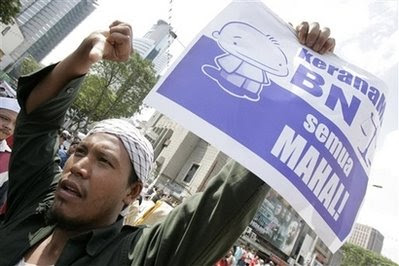 About 2,000 people marched from Kampung Baru mosque after Friday prayers to the iconic Twin Towers in Kuala Lumpur to protest against last week's sharp rise in petrol prices.

However, the police have blocked Jalan Raja Abdullah - the main road leading to the destination - Kuala Lumpur City Centre - about 3km away.

Faced with the roadblocks, marchers used alternative roads instead, many of whom headed north in a circuitous route to KLCC.At 2.22pm, many of them were in Chow Kit area, north of the city, with the traffic police seen helping to control the traffic.

The marchers, led by PAS Youth chief Salahuddin Ayub, then headed south along Jalan Tunku Abdul Rahman towards Jalan Sultan Ismail.However, in the effort to avoid an ugly confrontation with the police who have formed a tight cordon around KLCC, the crowd marched further south to the Sogo Department store.

And at Sogo, the crowd of about 1,000 people decided to conduct an impromptu sit-in in the middle of the busy Jalan Tunku Abdul Rahman, forcing traffic to a standstill.After a short while, following a brief speech by Salahuddin, the crowd dispersed from the area.

"This is a people's gathering demanding for the reduction in oil price. We will organise a bigger gathering on July 5," he told the crowd.However a small group of them continued their march towards the PAS headquarters in Jalan Raja Laut.

PAS leader Dr Dzulkifli Ahmad said that the march was a success although the police had blocked their route to the KLCC.

"We were still able to express our dissatisfaction," he told Malaysiakini .

Earlier at the Friday afternoon prayers, the mosque was packed with people - numbering some 3,000, while about 500 others prayed outside.

Just before the prayers, a mosque official urged people not to gather in the mosque compound to take part in the rally.

Earlier this morning, hundred of Federal Reserve Unit members were stationed at the Kampung Baru mosque and its surrounding areas.

Also in the vicinity was a water cannon truck and four FRU trucks.Several roads leading to Kampung Baru and other roads in the city were also blocked by the police.

Meanwhile in KLCC, dozens of police officers were seen at the entrance. One water cannon and seven FRU trucks were stationed behind KLCC at the park, along with a fire brigade truck.The rally today, one of many that is to be held in the coming weeks, is to oppose last the whopping 41 percent fuel price hike, which raised petrol prices at the pump to RM2.70 per litre. --- Malaysiakini

Letting the time pass me by said...

Street protest is never the answer to solve this problem. Boycotting something that will affects the govt is something that worth the magnitude of sending a message to the current govt.

Like it or not, my thought to such orchestrate move (street protest) is only a gain and win for some so-called political mavericks while the Rakyat still squaring at square one.

to teach our BN govt a lesson, let us all co-operate and STOP FILLING OUR PETROL FROM PETRONAS. FILL IT UP WITH OTHER OIL COMPANIES.

LET US ALL WORK TOGETHER NOT TO SUPPORT PETRONAS UNLESS THE GOVT IS WILLING TO MAKE THEIR ACCOUNTS PUBLIC !!!!!!