Obama triumphs, will be first black US president 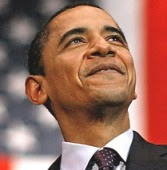 The son of a black father from Kenya and a white mother from Kansas, the Democratic senator from Illinois sealed his victory by defeating Republican Sen. John McCain in a string of wins in hard-fought battleground states — Ohio, Florida, Virginia and Iowa.

A huge crowd in Grant Park in Chicago erupted in jubilation at the news of Obama's victory. Some wept. Full AP report here .

Congratulations to Barack Obama, the first US president who is not from the Caucasian race.Unlike in Malaysia where the so-called "Ketuanan Melayu" concept prevail, the United States Of America practises genuine democracy.There is no "Ketuanan Orang Putih" concept!
I suppose anyone from any of the races can become President if he or she is capable.Just imagine, Obama's father is from Kenya!Perhaps, we should have a President elected from the peoples of all races rather than a prime Minister elected by two hundred over individuals, some of whom are prone to corruptions!

Let's hope he will bring a new Amrica, end the occupation of Iraq & Afghanistans,

Congratulations to Obama. Hope he will be better President than his predecessors, especially G. Bush Jr.

May God help him to serve all of America and the world at large.

Close Down KAMUTING
Bring Down ISA

Yeah, the Americans have done something right this time.

Well done, America, and welcome back to the international community - you have been missed!

Congrates to the Americans who voted for Barack Obama.

I think america has got a God gift person in the name of Obama a son of Black father. He would change the entire America in his Efforts and words.

Lest I'm accused of being a cynic while the world is rejoicing over Barrack Obama's unprecedented and historical victory & talking about the change that has come to America, my fervent hope is that the change will be for the better for the rest of the world.

There is so much expectation from the promises Obama made and I do hope he can fulfill them - especially with regards to America's foreign policy.

"If there is anyone out there who still doubts that America is a place where all things are possible; who still wonders if the dream of our founders is alive in our time; who still questions the power of our democracy, tonight is your answer," Obama triumphantly declared”

This is what I wish for...for my beloved country. It’s okay, we can wait. It took them more than 200 years to arrive.

There is one important lesson for our leaders and politicians from the recent-concluded American election. The humility shown by Obama in his acceptance after his victory and the graciousness displayed by McCain in his defeat.

Can'agree more with you, hakim!

Besides, his message of change was clear & inspiring, It wasn't mere rhetorics. I also think the majority of Americans could not stand another four years of Bush politics.

i am all for him but again like one of the commentator said here earlier, this feat came after more than 200 years...so dont be too harsh on ourselves....

It took America more than 200 years for an Afro American to become President...I guess the non-bumi will have to wait for more than another 100 years to see a non-bumi PM. What Pak Lah said was correct...Malaysia can expect a non-bumi PM in future. So to the non-bumi pls be patient 100 years is not a long time in history.Wait ok??