"No" to Hindraf's planned gathering today 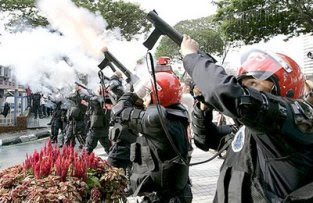 Police used tear gas and chemical-laced water to break up a crowd of 300 in a rally , organized by the the Hindu Rights Action Force (Hindraf), at Jalan Raja Laut here this morning.

About 130 people, were arrested but most of them were released after their particulars were taken down. Only nine, including two women, all aged between 35 and 40, were remanded.

Around 100 policemen, including riot police with helmets and shields, turned up to disperse the protesters waving the Malaysian flag, portraits of the Malaysian king, and orange banners that read, "We want our rights, No to the Internal Security Act".

The protesters - among them children as young as 10 - had planned to gather outside parliament to hand a protest note and roses to the Prime Minister Datuk Abdullah Badawi, but they were halted by police a short distance away.

Police had earlier set up road blocks and closed the road leading to Parliament building. The road closures resulted in Hindraf changing their destination to the Suhakam office at Jalan Raja Laut.

At 9.20am, police used tear gas and water cannons to disperse the crowd at Jalan Raja Laut after repeated warnings went unheeded. Many of the supporters scattered to Jalan Tuanku Abdul Rahman and Masjid Jamek areas.

Hindraf first announced the protest in January to demand for the release of five of its leaders jailed under the ISA soon after more than 10,000 Indians marched here in Kuala Lumpur last November to complain about a lack of job and education opportunities, in response to a call from the group.

Police have rejected the appeal by the Hindu Rights Action Force (Hindraf) to hold their gathering at 9am Saturday (today) in front of the Parliament building to demand for the release of several of its members who are being detained under the Internal Security Act (ISA).

The appeal, which was the second submitted by Hindraf on Thursday, was rejected because it is not a registered organisation and the gathering would involve 200 children, Kuala Lumpur Police Chief Datuk Muhammad Sabtu Osman said.

KUALA LUMPUR, Feb 15 (Bernama) -- Police have rejected the appeal by the Hindu Rights Action Force (Hindraf) to hold their gathering at 9am Saturday in front of the Parliament building to demand for the release of several of its members who are being detained under the Internal Security Act (ISA).

Kuala Lumpur Police Chief Datuk Muhammad Sabtu Osman said the appeal, which was the second submitted to him by Hindraf Thursday, was rejected after finding that the organisation was not registered and that 200 children would be involved in the gathering.

"We fear that the safety of the children would be jeopardised and the group was also providing 30 gangsters purportedly to provide protecttion for the children...but we believe the presence of the gangsters would lead to more serious crime," he said at a press conference at his office here.

Muhammad Sabtu said stern action would be taken and the children involved would be detained and placed under the care of the Welfare Department.As a precautionary measure, police would set up roadblocks within the Klang Valley to maintain security and prevent undesired elements from coming to create trouble.

In the operation codenamed `Ops Padam' beginning this afternoon, the roadblocks would be set up along 12 roads. They included Jalan Kuching, Jalan Duta Toll Plaza, Jalan Ipoh and Besraya Expressway and the Federal Highway.

He also said that police had detained two members of `Bersih' about 2.30pm Friday when about 50 members of the group gathered in front of the Istana Negara to hand over a protest memorandum to the Yang di-Pertuan Agong.

"We have detained two members of the Bersih group namely Tian Chua and Jalaludin Abdul Manap for being involved in a gathering without valid permit in front of the Istana Negara this afternoon," he said.-- BERNAMA
Posted by maria a samad (kak ton) at 2/16/2008 01:47:00 am

I am all for freedom of speech and expression.

But using children? No way, I am for this. Just dont get them involved.

This is absolute nonsense, using children to further their political cause.

Hi,Hindraf, stand up like a man and fight like a man.You started the war, you fight it to the end.

If I were the authority I will find the organisers and arrest them for endangering the lives of those young children.

Kak Ton,
I agree with what is said anonymous. Hindraf seems to be at their wits end trying to undo the mistakes that they had done when they started all this.

People, heard about the rat who struck back when cornered? Lets not use the same brush all the time. Peaceful negotiation in this country seems a very expensive, if not an impossible, commodity. I am saddened and this old heart grieves.

You're one of my favourite bloggers. I have the highest respect for you - your wisdom & your commitment to making this country a better place for ALL Malaysians which I subscribe to.

Hindraf has the right to voice out its grievences against the Governemt, but I draw a line when it comes to using children to fight its cause.

Puteri, thank you for those sentiments expressed. Maria, allow me to use this box to lighten this grief: children say the darndest things and children's antics never fail to entertain; children soften us with their looks; we melt in those little things they do and say. If the arrogant Abdullah "why should I meet the children" Badawi takes such a hard stance with the children, nothing you and I sermonise about will change things. the poor amongst the Indians are desperate.....deep inside me I will not support them if they wanted to use the children as SHIELDS. when I walked with them on 25 Nov. I declared that I was not walking for Hindraf but for the poor with whom I cherish very close affinity, having spent ten years teaching in sentul.I was there yesterday.....the children were hardly visible except for two litttle boys....one holding on to the mother when they dragged her off. I detest the acts of groups who use children in battles and ambushes. In our case, in yesterday's case I just plead for some empathy. If my thoughts on this is out of place or against sensitivities I seek your indulgence and forgiveness. Allow me to share a quote I just posted in my recent posting: "In matters of style, swim with the current. In matters of principle, stand like a rock." Thomas Jefferson.
This old rock, though still rough and brittle will not be moved from its current stand....to do my little bit for the neglected abject poor. I take leave now to go to Puchong to give one hour of tuition to 24 very poor indian and malay kids. Again I ask for your forgiveness if what I said went against the grain.Peace to all.

Some childrens are BRATS!

Do we expect the PM to meet with protestors when the gathering is illegal in the first place? If he does that, he is condoning the gathering.

If you have a memo to send, send it using the right channel and the right way.

Wasn't Pak Lah trying to prove he cares for the people? There's children in this crowd; they wanted to give roses to him; why can't he accept roses from these people?

If we watch the video, these people were shouting they love Badawi.