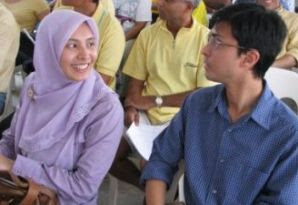 The People’s Declaration was launched today by a group of concerned citizens calling themselves Barisan Rakyat at the Blog house in Bukit Damansara.

DAP, Pas, PKR, and MDP sent representatives to formally endorse the Declaration. Several representatives from the ruling coalition were also there. So were some of Malaysian top bloggers.

Lawyer Haris Ibrahim said the document is a gift from the rakyat to the candidates who wish to endorse it. The Piagam Rakyat, in a nutshell, calls for efforts to create a Malaysia for all Malaysians, to kill corruption, eradicate poverty, bring back genuine democracy, free Press, and an independent judiciary.
At the heart of the Declaration is a wish to do away with race-based political parties, education system, and economic opportunities.
"For too long, this country's civil society movement has been detached from the political process. No more.Today, the Rakyat is the boss!"

Let me as just this 1 question and I hope to receive an answer.

Under what platform did the rakyat of Malaysia gives these people the mandate to speak on thier behalf?

Syabas Barisan Raykat. Thank you for speaking on my behalf.